I am, of course, designing my own ruleset

As the title says, I am currently in the process of designing my own ruleset.  But why, you may ask, do we need another ruleset?  Allow me to explain:

Games always have a certain trade off between interesting characters and interesting worlds.  Trying to engage with an interesting, weird fictional world takes up about all of the average person's brain power and attention.  At the same time, trying to get inside the head of an interesting fictional character ALSO takes a player's full attention.  This means that you can't really play a game that simultaneously has complex, interesting characters and a weird, fascinating world.  I've tried it and it just makes your brain overheat like an old laptop with too many programs running.
I think this is why a lot of character-driven games are intentionally wedded to a specific genre, established fictional setting, or type of story.  Familiar tropes are necessary to reduce cognitive load and therefore allow people to dive in complex characterization.  I think that cognitive load also explains why "fail forward" games such as PbtA and Burning Wheel have trouble handling the really weird stuff that OSR does so well.  Fail-forward games force the GM and players to invent complications on the fly for each failed roll, which means the facts of the fictional universe change rapidly based on dice rolls.  This is mentally taxing, and leads these games to rely more on tropes and genre conventions to the detriment of really creative stuff.  OSR/adventure games, meanwhile, start with simple characters to allow for the players to engage with a more complex world.  However, this means that characters tend to be rather one-dimensional, instead of changing and growing like real people.
In light of all this, idea occurred to me: why not create a game that allows you to switch between those playstyles in a systematic way, using the same characters.  A system that has the mechanics to facilitate those switches.  You play some traditional dungeon crawls, then you take a break from that and play out some character drama, then you go back to traditional adventuring.  That's the project I'm working on right now.  Will I ever finish it?  Maybe, maybe not, but I'll drop bits and pieces as I can.
I promise it will be painfully sincere and utterly tasteless.
at February 23, 2022 No comments:

I saw an article a while back about the shape of human hearts.  People who train for strength or speed or who don't train at all tend to have round hearts, similar to what is seen in other primates like chimps.  But endurance athletes have something special: endurance training causes their hearts to grow into an elongated shape.  When, say, a runner goes out for a long jog, the elongated shape of their heart causes the heart to bounce back and forth as it beats.  The momentum of the twisting allows the heart to move more blood with less muscular effort.  In other words, humans have a latent genetic ability (to use momentum of the hearts movements to pump blood more efficiently) that is only expressed in certain environmental conditions.

In a fantasy world, what other abilities like that might humans have?  If the interior of the fantasy world is filled with vast networks of tunnels, then maybe humans have evolved ways to survive underground, but these traits only express themselves if you spend a few years down there.  Maybe if you go deep enough into the dungeon you'll find colonies of humans with strangely large eyes, better for seeing in the dark.  And if you join them, your eyes will gradually get bigger as well.

Anyway, instead of adding yet another fantasy species to your game, just make humans weirder.

On Hacking DramaSystem for Solo Play

I have been pondering for a while how to add mechanized character drama to my solo games.  In regular games, a lot of character drama can be covered by players simply talking to each other.  Obviously, that won't work in a solo game.  To remedy this, I decided to take Robin D. Law's DramaSystem (found published in the game Hillfolk) and hack it into something more amenable to solo play.

DramaSystem is organized around several concepts:

The game is structured around "petitions."  Each scene, a character will approach one of the other characters and try to get the them to satisfy the petitioner's emotional desire.  The receiver of the petition chooses to either grant or deny the petition.  The game uses a system of tokens to make sure that characters sometimes grant petitions and sometime deny them.

So what needs to change to make this into a solo game?

The original rules of dramasystem rely on the players to decide what character petitions which and when it should be played out.  Players simply declare that their character should do a dramatic scene with another character.  This won't work for a solo game.  I've solved this by assigning a risk die to each fraught relationship.

For those not familiar with the concept, the Risk Die is a dice mechanic introduced in the game Blackhack.  It is intended to represent a diminishing resource.  It works like this:

So how is this used to model drama?  On a 1-3, a dramatic scene happens related to that fraught relationship.  The result of the scene determines whether the die type goes up the chain or down the chain

The most important part is the setup.  Make a list of PCs and important NPCs.  Make a mind-map showing how they relate to each other.

Periodically roll the risk die associated with each fraught relationship.  If the result is higher than 3, nothing happens.  If the result is 1-3, then the character associated with that fraught relationship will approach the target of their desire and attempt to get that person to meet their desire.  Usually this will take the form of a conversation.  If the petitioner gets what they want, raise the risk die by one step.  If they don't get what they want, lower the risk die by one step.  If the character rolls a 1-3 on a D4, then they take some dramatic and ill-advised action in pursuit of their emotional desire.

In play tests so far, this has worked well at providing a steady stream of low-level character drama.  However, I've realized the system is not complete.  As written above, the system provides no incentive to resolve the conflicts.  the character's risk die tend to just move up one step, down one step, up one step, indefinitely.  This isn't such a problem for unimportant characters, but it's and unsatisfying way to handle important relationships.

Feel free to comment if you have any ideas on how to complete the system.

B/X D&D and many OSR rulesets use a 2d6 roll modified by charisma bonus to determine whether enemies are hostile, indifferent, or friendly.  However, I've always found a part of this nonsensical: the idea of having one trait that makes all creatures respond more positively doesn't really make sense in a fictional way.  Here's why:

We can roughly divide creatures one might encounter into two categories: Offensive and Defensive.  Offensive creatures include:

• Predators searching for a meal

• Those protecting their young

If you want to add even more nuance, give two +1/-1 bonuses to the reaction roll, which either cancel each other out or stack.  One of the bonuses reflects your character's appearance, and rarely changes.  The other bonus reflects your character's choice of whether to act in an intimidating way or to act in a harmless way.  This gives the players a simple element of choice in how the approach an encounter, which can increase engagement.  However, they shouldn't always know what the ideal way to approach an encounter is.

While it does make reaction roles more complicated.  I think the amount of nuance it adds is fairly substantial for the amount of complexity.

Why does that creature exist?

One of the more controversial decisions Gary Gygax made in D&D was what later commentators called "Gygaxian naturalism".  This refers to portraying monsters as members of an entire species that naturally exists.  This isn't always bad, but there are alternatives.  Other people with blogs have spent a great deal of time discussing this subject already, so I decided to just make a table including all the possibilities I can think of for alternative creature origin.

Comment if you think of any more to add to the list.  One obvious possibility is aliens, but I left that out since I never include them in my games.

D8/D6: Why does that creature exist? 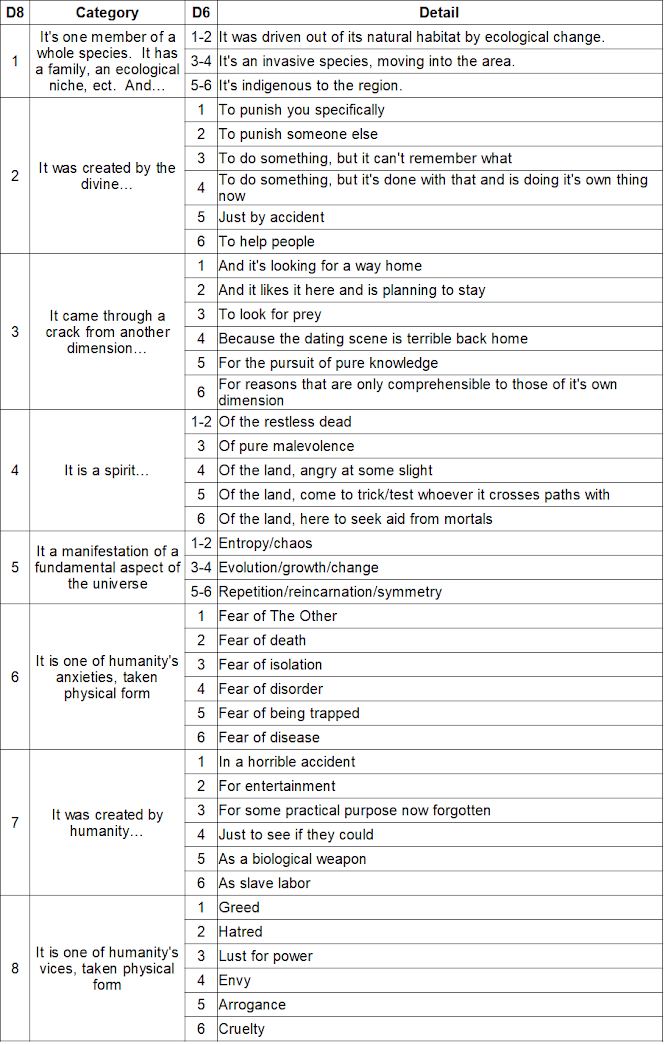 When I'm playing a solo dungeon crawl, all of the dice rolling can get monotonous.  I like to stock my dungeons using a deck of cards instead, it adds some nice variety.

This is based on the Random Dungeon Stocking rules from Old School Essentials. 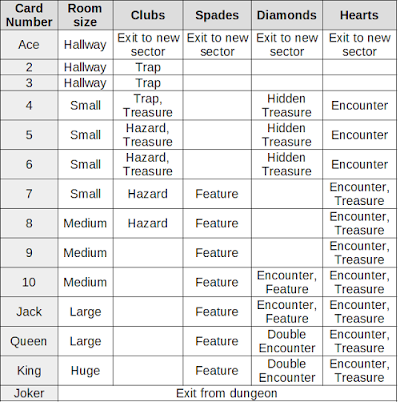 Double Encounter means you roll up 2 encounters, but the two groups of creatures are in conflict with one another

Small: 2-3 squares per side

Medium: 4-5 squares per side

Large: 6-7 squares per side

Huge: 8+ squares per side

D10: Why is that person/creature doing evil stuff?

I came across this post a while back and found it quite in line with how I wanted my games to run.  I decided to make a convenient table of the main categories of villain motivations, to ensure villains have a nice variety of motivations.
Anyway here it is:
D10: Why is that person/creature doing evil stuff?
Please comment if you can think of any more options to add to the list.

I am, of course, designing my own ruleset

As the title says, I am currently in the process of designing my own ruleset.  But why, you may ask, do we need another ruleset?  Allow me t...

Peach Muffin
This is a blog about Pen-and-Paper roleplaying games. My main focus is OSR/adventure games, but I branch out sometimes. I am currently designing a solitaire adventure game.